ABSTRACT
In the proposed scheme, initially the three colour components are represented into two overlapping blocks like the combination of red and green colour components, while another one is the combination of green and blue colour components, respectively. Later, the PVD technique is employed on each block independently to embed the secret data. The two overlapping blocks are readjusted to attain the modified three colour components. The notion of overlapping blocks has improved the embedding capacity of the cover image. The scheme has been tested on a set of colour images and satisfactory results have been achieved in terms of embedding capacity and upholding the acceptable visual quality of the stego-image.
EXISTING METHOD
Proposed an improved LSB substitution scheme which works on modulo three strategies. The LSB-based steganographic scheme has fixed payload capacity. To improve the payload further, several researchers have proposed edge based steganographic schemes. In natural images, it has been noted that the modification in the smooth region is easily noticeable by human visual perception, and hence hiding more message bits in the edge region is preferred. Such a technique is also proposed .where they have developed an edge-based image steganographic scheme where the edge pixels are identified by the combination of the fuzzy edge detector and the canny edge detector, and subsequently, the more secret message bits are embedded in the edge region, rather than the non-edge region, using the LSB method.
The combination of the fuzzy edge detector and the canny edge detector has effectively increased the number of edge pixels; as a result, the embedding capacity is high in their proposed scheme. The authors have distributed image pixels into two categories, i.e. edge pixels and non-edge pixels. A larger number of secret bits are embedded into each edge pixel compared with the non-edge pixels. They have improved the payload capacity but they have compromised with minute visual distortion that occurs in the stegoimage. To preserve the high visual quality of the stego-image, the proposed scheme of Islam. Has concealed the secret message bit streams only at the edge region.
In their scheme, the cover image is pre-processed, so that the edge region will be the same even after the embedding of secret message bits. The edge region of the pre-processed cover image is located by a suitable threshold value and that was considered as a stego key. This process enhances the security level further.
DISADVANTAGES
The previous studies were limited in the sense that they didn’t jointly consider the relational information in a unified framework.
PROPOSED METHOD
The proposed colour image steganographic scheme is presented in this section. Initially, each colour pixel is decomposed into its corresponding colour components, i.e. R, G and B. Later we have formed two pairs with a combination of (R,G) and (G,B). Other ordered pairs are also acceptable, but in this work, we have implemented our scheme using the pairs like (R,G) and (G,B). (R,G) and (G,B) will form two consecutive overlapping blocks.
In our scheme, we have embedded the variable secret message bits based on the difference of each pair using PVD. After embedding the secret message bits into each pair, the intermediate colour components are further readjusted to attain the final stego colour components. A natural colour image may be dominated by particular colour components as an outcome of the data hiding process of that particular pixel, and the distortion may be large enough to be perceived.
In this Project, we have avoided this circumstance by adopting a suitable threshold value. The data-hiding capacity in each colour pixel is restricted by the threshold value, so that the stego-image may retain high visual quality.
ADVANTAGES
The proposed scheme has a larger hiding capacity with acceptable imperceptibility of the stego-image. In addition, the proposed scheme is simple and easy to implement on RGB colour images.
BLOCK DIAGRAM 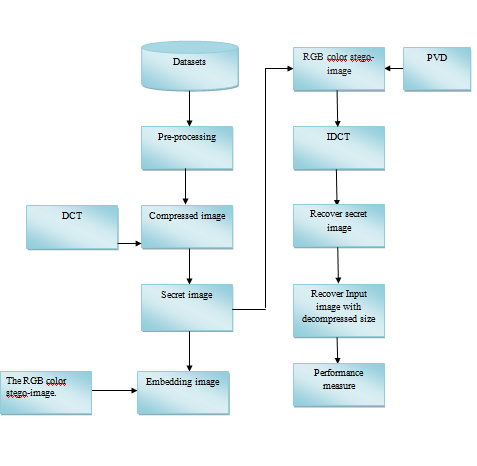