ABSTRACT:
TV Show Popularity prediction using sentiment analysis is one of the most interesting and challenging tasks. A critical demand along this line is to predict the popularity of online Celebrities, The problem motivation stated above suggest is that it is only the viewer of a program who is responsible for its popularity or failure and if we anyhow can identify the most common features of a program which, the viewers want most, and through some effective scientific methodology could insert these requirements in the proposed TV program well at the time of production.
The purpose of this work is to evaluate the performance of TV Show and also calculate how many people are liked to a particular show or actors of that show and predicting Popularity of that shows
EXISTING SYSTEM:
With the rapid development of sharing Websites, more and more people would like to become audiences in their daily entertainments. Such as TV shows and Webisodes, to attract more audiences. Although many efforts have been devoted to the popularity prediction. Also, episodes released on weekends or holidays may attract more audiences than those on workdays. Furthermore, since different episodes are usually released on different days, Therefore, the popularity prediction for TV shows is one of the most interesting and challenging tasks. The analysis of Sentimental comment and predicting whether it is good or bad comments. Easy prediction of TV Show trending based on people rating.
Good or Bad comments based on peoples reviews or comments. Easy importing of data and exporting it into the graph. Graphical data in the printable format. The visitor will get to know the show popularity. Reality TV is the new mantra of television producers and channel executives. The Main purpose is to TRP ratings. Nowadays Most of the television shows are reality shows specializing in dancing, singing, and acting. We conclude to build such a system that will interpret people s sentimental comments on TV shows.
The tweets related to the particular show will be extracted. The comments will be gathered from various sources social networking websites like Twitter. On the basis of comments given by the people and sentiments, the TV Show popularity will be rated. The system allows admin to add text views likes-dislikes and their sentimental comment. Based on the people s comment, Visitors can view TV show popularity data Visitor can also view the popular show rating as well as the top show in a country.
DISADVANTAGE:
• Popular show analysis has not analysed show celebrities to show the rating based on Celebrities TRP
• Data analytics has been done with less data to find accuracy of Tv show popularity
PROPOSED SYSTEM:
Here, we will work on some problem statements and come up with solutions using Pig scripts. We have a historical data of The Daily Show guests from 1999 to 2004  we will Find the top five kinds of GoogleKnowlege_Occupation people who were guests in the show, in a particular time period.
And we will find out the number of politicians who came each year. So we can categories politicians and other occupation peoples easily by this classification.
Find the number of Google Knowledge occupation types in each group, who have been guests on the show here we will classify Number of Google Knowledge person also for classification
We will find out what are the combinations of group and the Google_knowledge_occupation types who have been guests in the show. To verify Google Knowledge occupation types in each group who have been guests on the show
ADVANTAGE:
1. Large amount of information has been analysed to classify popular shows with google knowledge person
SYSTEM ARCHITECTURE: 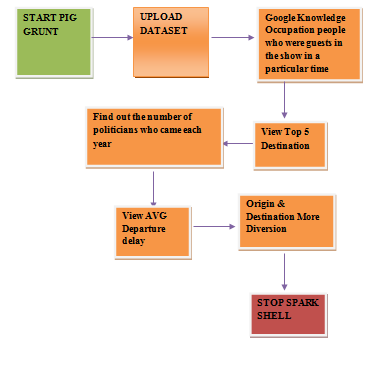