ABSTRACT:
With the advancements in wireless networks, the number of user devices has increased dramatically, resulting in high device densities. Despite the resulting data traffic deluge, accompanied by severe security threats, wireless networks with high device densities are also breeding grounds for user cooperation. Considering various challenges and opportunities, this article attempts to enhance user cooperation utilizing big data generated from wireless networks toward achieving efficient and secure transmission. In particular, big data, viewed as a resource or tool, is employed to find potential connections among user devices, being followed by user cluster formation. Preliminary results demonstrate that big-data-driven user cooperation facilitates the utilization of wireless resources and reduces the secrecy loss originating from high device densities. Finally, this article identifies research topics for future studies on big-data-driven user cooperation and secure transmission in wireless networks.
EXISTING METHOD:
To enhance the utilization of wireless resources, clustering as a method of user cooperation is often considered in the conventional wisdom. In wireless environments, antenna deployments, the proximity of users, and scattering around users can cause correlative signal transmission paths between user devices and thus high correlations between channels may occur when user devices are dense. Under these circumstances, the similarity with respect to channel state information (CSI) among different user devices can be exploited to enable channel cluster formation. With each formed cluster, messages from the base station are directly sent to cluster members by multicast, which can enhance resource utilization.
However, the transmission rate in multicast is in general constrained by the minimum rate of all users receiving the same signals. With the bottlenecks that channel cluster schemes face, the authors employ big data as a new way to solve these problems. In particular, adopt a similar idea to multicast but go further by clustering with the help of big data, therein effectively avoiding the disadvantage of multicast. However, does not consider security issues.
PROPOSED METHOD:
In the model, Alice is equipped with multiple antennas, with each Bob having only a single antenna. Thus, the transmission from Alice to Bob can be enhanced using a beam former at Alice.
Since the CSI of the Alice-Eve link is not available, AN is often inserted into the transmitted signal to degrade the reception at Eve and consequently further increase the signal quality difference at Bob and Eve, aiming at maximizing the secrecy performance.
Unfortunately, such signal processing techniques at Alice are less effective in the scenario where main and wiretap channels (those are the channels from a transmitter to an authorized receiver and an unauthorized receiver, respectively) are highly correlated.
This is mainly because signal processing techniques in PHY-security are inherently based on differences between wireless channels. With high device densities, there may exist at least one Eve nearby Bobh, which often causes high correlations between Bobh and Eve. As a result, it is easy for Eve to see and intercept more confidential information that Alice sends to Bobh; thereby, the transmission from Alice to Bobh suffers a significant secrecy loss.
ADVANTAGES:
Our cluster-based approach is feasible for the dispatch of the mobile sink.
• Reduce the energy consumption
• Decrease the hop count
• Decrease the delay time
• Increase the throughput
ALGORITHM DETAILS:
TCP RENO ALGORITHM
SYSTEM ARCHITECTURE: 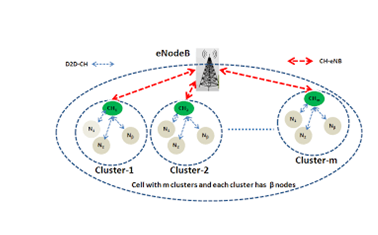