ABSTRACT:
Road networks are extremely vulnerable to cascading failure caused by traffic accidents or anomalous events. Therefore, accurate identification of critical nodes, whose failure may cause a dramatic reduction in the road network transmission efficiency, is of great significance to traffic management and control schemes. However, none of the existing approaches can locate city-wide critical nodes in real road networks. In this paper, we propose a novel data-driven framework to rank node importance through mining from comprehensive vehicle trajectory data, instead of analysis solely on the topology of the road network. In this framework, we introduce a trip network modeled by a tripartite graph to characterize the dynamics of the road network. Furthermore, we present two algorithms, integrating the origin-destination entropy with flow (ODEF) algorithm and the crossroad-rank (CRRank) algorithm, to better exploit the information included in the tripartite graph and to effectively assess the node importance. ODEF absorbs the idea of the information entropy to evaluate the centrality of a node and to calculate its importance rating by integrating its centrality with the traffic flow. CRRank is a ranking algorithm based on eigenvector centrality that captures the mutual reinforcing relationships among the OD-pair, path, and intersection. In addition to the factors considered in ODEF, CRRank considers the irreplaceability of a node and the spatial relationships between neighboring nodes. We conduct a synthetic experiment and a real case study based on a real-world dataset of taxi trajectories. Experiments verify the utility of the proposed algorithms.
EXISTING METHOD:
A. Evaluation of Node Importance
In complex networks, due to the cascading failure phenomena resulting from the failure of a small number of important nodes, identifying important nodes is of vital significance to prevent collapse and to maintain the functionality of the network. The methods in this research area mainly exploit the network topology and can be divided into four categories: node importance ranking based on
1)  The local centrality measure,
2) Global centrality measure,
3) Eigenvector centrality, and
4)  Node removing.
B. Data-Driven Road Network Analysis
The flourishing of sensing technologies and large scale computing infrastructures have produced a variety of big and heterogeneous data for urban spaces, e.g., human mobility, vehicle trajectories, air quality, traffic patterns, and geographical data. These data inspire a variety of novel data mining methods for road network analysis. A LDA-based inference model that combined road network data, points of interests, and massive taxi trajectories to infer the functional regions in a city was proposed.
DISADVANTAGES:
• When any mobile node dies or node moves to another cluster it comes the re-clustering sometimes. It is called as the ripple effect of re – clustering.
• Clustering is dividing in to two phases cluster formation and cluster maintenance.
• During cluster formation all nodes are mobile nodes so routing strategies may be frequently changed that will decreases the performance of the network.
PROPOSED METHOD:
Data-Driven Cluster Formation:
Clusters can be formed in two steps. First, according to certain rules, the cluster head Bobh for each cluster is chosen, thereby forming an initial cluster consisting only of itself. Second, any other Bob, satisfying the preset condition, is added to the cluster in the form of Bobc.
Cluster Head Selection:
For each cluster, Bobh must meet two requirements: Bobh must ensure better confidentiality
when communication with Alice than Bobc, and Bobh must be able to share confidential messages securely and smoothly with as many Bobcs as possible.
1. Secrecy Capacity:  For the first requirement, we use the secrecy capacity to measure the secrecy performance when Bobn (n denotes Bob’s index) communicates with Alice. The secrecy capacity, denoted by Cs n, is defined as the maximum message transmission rate that confidential communications are able to be implemented with wiretap channel coding.
2. Ability for Sharing: For the second requirement, we use the number of Bobs (denoted by Nn) who can securely and smoothly obtain confidential messages shared by Bobn to measure the ability of Bobn for sharing.
3. Utility Function: When the above two requirements are considered jointly, a utility function Utilityn can be defined to evaluate the ability of Bobn to be a cluster head. In particular, we aim at maximizing the secrecy sum rate that Bobn can achieve for the whole cluster if it becomes the cluster head.
ADVANTAGES:
• It increases system capacity by spatial reusing available resources.
• If two clusters are not neighbouring clusters and they are not overlapped then they can use same of frequency.  Resources allocation can be done.
• Reduction of control packet in routing.
• It allows the better performance of the protocol for the medium access control (MAC), layer by improving the spatial release throughput, scalability and power consumption.
• It helps to improve routing at the network layer by reducing the size of the routing tables.
ALGORITHM DETAILS:
CLUSTER HEAD SELECTION ALGORITHM:
A. Tripartite Graph of Trip Network
Differing from the road network reflecting the geometric structure, the trip network characterizes the dynamics of the road network, such as the traffic flows from different OD-pairs and path selections.
B. The ODEF Algorithm
To accurately evaluate the centrality of the nodes and locate the traffic hub, we introduce the concept of OD entropy. And then we integrate the OD entropy with the traffic flow to calculate importance ratings of each node.
C. The CR Rank Algorithm
Mutually reinforcing relationships among linked objects in the graphs are ubiquitous and considered as the basis of many ranking algorithms, e.g., in the HITS algorithm, each webpage has both a hub score and an authority score.
SYSTEM ARCHITECTURE: 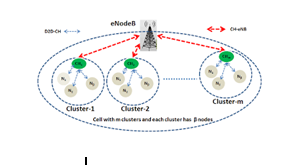