ABSTRACT:
In a hospital environment, the total number of Wireless Area Network (WAN)equipped patients requesting ubiquitous healthcare services in an area increases significantly. Therefore, increased traffic load and group-based mobility of WANs degrades the performanceof each WAN significantly, concerning service delay and network throughput. In addition, the mobility of WANs affects connectivity between a WAN and an Access Point (AP) dynamically, which affects thevariation in link quality significantly. To address the connectivity problem and provide Quality of Services (QoS) in the network, we propose adynamic connectivity establishment and cooperative scheduling scheme,which minimizes the packet delivery delay and maximizes the network throughput. First, to secure the reliable connectivity among WBANs andAPs dynamically, we formulate a selection parameter using a price-basedapproachA cluster head can reduce some message load by shifting some its sensors to neighbouring cluster. A lightly loaded neighbour cluster head expands the cluster by receiving some sensors to reduce the load of the congested neighbour cluster. This paper introduces the cluster shrinking and expending technique in a special way considering the congestion in the network.
CONTRIBUTION:
For minimizing the packet delivery delay, while ensuring continuity in connectivity between WBANs and APs, we proposed a dynamic connectivity establishment scheme. The scheme is particularly useful in WBANs with transient connectivity. Additionally, the proposed scheme end eavors to provide QoS services to the WBANs in terms of service delay and throughput in a critical emergency situation. The main contributions of this work are
summarized as follows:
1. Dynamic connectivity establishment for WBANs to manage transient connectivity between them and the APs, caused by factors such as body shadowing [4] and mobility of WBANs.
2. The proposed scheme opts for dynamic connectivity with an AP, in the presence of multiple WBANs in a critical emergency situation, in hospital environments.
3. After addressing the dynamic connectivity problem, we propose to form coalition game to minimize the service delay and schedule the packets of different WBANs cooperatively.
4. We prove the existence of Nash Equilibrium for the proposed coalition game to obtain a stable formation for the WBANs through cooperative packet scheduling. Further, a Markov model is used to analyze the stable coalition formation.
5. We also propose a dynamic cooperative packet scheduling algorithm for use among WBANs, to minimize the service delay and increase the network throughput.
EXISTING METHOD:
o Interference from coexisting WBANsdegrades the performance of each WBAN in terms of networksthroughput and energy consumption.
o To minimize the effect of interference from co-existing WBANs, Cheng and Huang proposeda graph colouring-based inter-BAN scheduling scheme, in which adense sensor architecture is implemented using spatial-reuse colouringand, scheduled the body sensors in different time slots. Similarly,to minimize the effect of interference, Xieetal.
o Proposed a Clique-Based WBAN Scheduling (CBWS) algorithm, in whichWBANs is partitioned into different groups, which are activated in different time slots. Interference from the coexisting WBANs not only affects the inter-BAN communication, but also affects the intra-BAN communication.
1. Opportunistic Packet Scheduling.
2. ACT Algorithm.
DISADVANTAGES:
1) Power Efficient Wireless Technologies: One important metric in the choice of a wireless technology is its power usage which is undoubtedly tied with the design of a power efficient BAN
2) Frequency: The IEEE 802.15.6 standard has defined a number of physical layer modes of operation: narrowband, ultra wideband (UWB) and human body communication (HBC), where a number of carrier frequency bands are supported for each of the modes.
3) Interference: Interference is known as one of the crucial drawbacks of BAN systems. Several types of interference in BANs. On one hand, interference occurs in cases where several people are wearing BAN devices and step into each other range which makes coordination impossible (off-body interference).
4) Number of Nodes: In, BANs are stated to support a maximum of 256 devices in one single network. At the Wireless World Research Forum (WWRF) held in 2004 in London the number of nodes in a BAN was estimated to reach up to 1010 or more by 2012 with a dense distribution for nodes in a BAN which is only limited by one’s body size.
PROPOSED METHOD:
AP dynamically among multiple APs in a hospital environment in the presence of multiple WBANs. Also, we prove the requirement of dynamic selection of AP in medical emergency situations. A dynamic AP is chosen based upon different selection parameters — available bandwidth, received signal strength, residual energy, and criticality of the WBANs.
A Requirement of Dynamic Connectivity Establishment When a WBAN moves from one area to another, and gets connected to an AP, then the AP is to be chosen in a dynamic manner. As the WBAN moves from one place to another, then the service delay of getting access from an AP also increases. This may lead to packet loss, thereby affecting the patients. We now present some of the theoretical results, which assume a hospital environment.
1. Distributed cooperative packet scheduling.
ADVANTAGES:
 Wireless body sensor networks are used in those harsh and hostile environments where wired networks can t be deployed.
 For example in a forest, wireless sensor nodes are dropped from the air because going down there and deploying a wired setup is not possible.
 Another advantage is that the wireless body sensor networks are scalable.
 In applications such as Structural Health Monitoring where there is a need of dense deployment and with a dense wired set up, it may lead to a chaos at the time of deployment. Moreover a dense wired set up will prove to be very costly.
 On the other hand, wireless sensor nodes can easily be deployed without any hustle.
ALGORITHM DETAILS
Distributed cooperative packet scheduling
SYSTEM ARCHITECTURE: 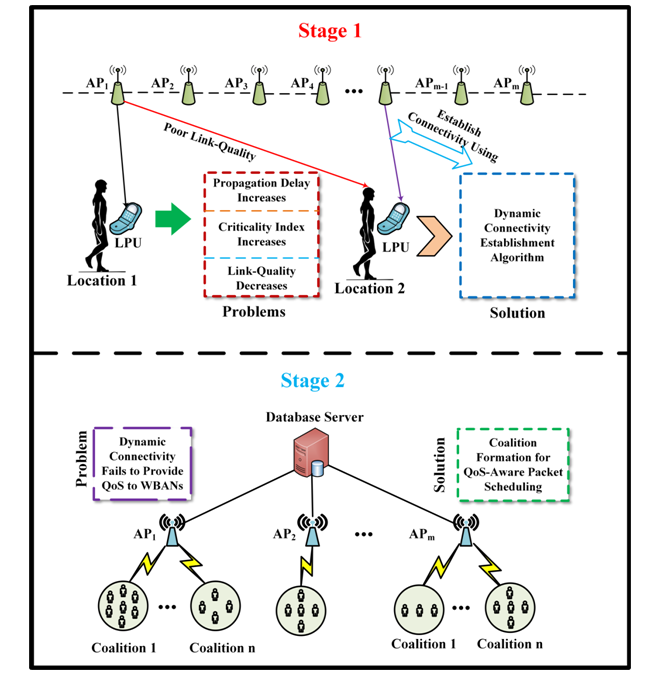