ABSTRACT:
Information hiding aims to embed secret data into the multimedia such as image, audio, video, and text. In this s, two new quantum information hiding approaches are put forward. A quantum steganography approach is proposed to hide a quantum secret image into a quantum cover image. The quantum secret image is encrypted. The encrypted secret image is embedded into the quantum cover image using the two most and least significant qubits. In addition, a quantum image watermarking approach is presented to hide a quantum watermark gray image into a quantum carrier image. The quantum watermark image, which is scrambled by utilizing Arnold’s cat map, is then embedded into the quantum carrier image using the two least and most significant qubits. Only the watermarked image and the key are sufficient to extract the embedded quantum watermark image.
CONTRIBUTION:
The usage of quantum medical  image serves the purpose of encryption, and DWT, watermarking, LSB and MSB algorithm helps in improving the hiding capacity. The advantage of using DWT over other transforms, is that it offers a temporal resolution. This algorithm is also stronger and robust as well as secure compared to other algorithms. No visual defects can be observed from the corresponding stego images. It can also be referred to devise new algorithms on ways to send different language secret texts or images in audio as well as video files with more dynamicity.
EXISTING METHOD:
• Discrete wavelet Transform (DWT) based Steganography.
• The Existing system deals with hiding text in an image file using Least Significant Bit (LSB) based Steganography,,
DISADVANTAGES
• Accuracy is less in medical imaging
• Less PSNR
PROPOSED METHOD:
A quantum stegnography method is proposed to hide a Quantum secret image into a Quantum cover image that is  Quantum watermarking technique is used to hide data. The proposed scheme utilizes the Arnold’s cat map to create an incomprehensible watermark image before embedding it in an carrier image, then it is embedded by using Least significant qubits. Only the watermarked Image and Key is required to extract the watermark from  the watermarked image, and the original carrier image is not needed.
ADVANTAGES
• Good  PSNR as compared with the existing system
• Accuracy is improved because of qubits i.e., Quantum image
BLOCK DIAGRAM:
ENCRYPTION: 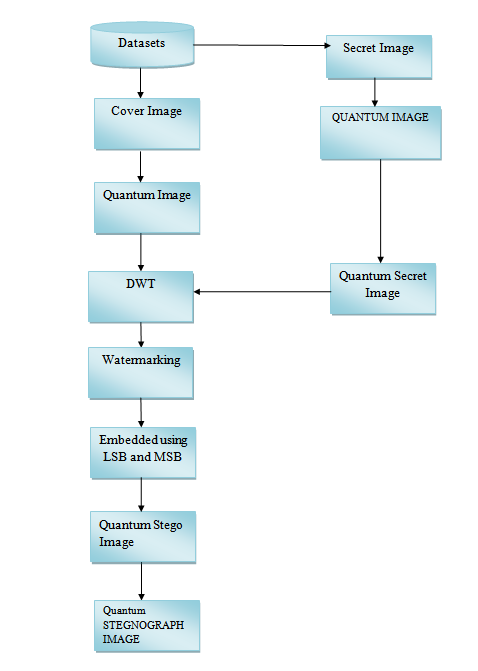 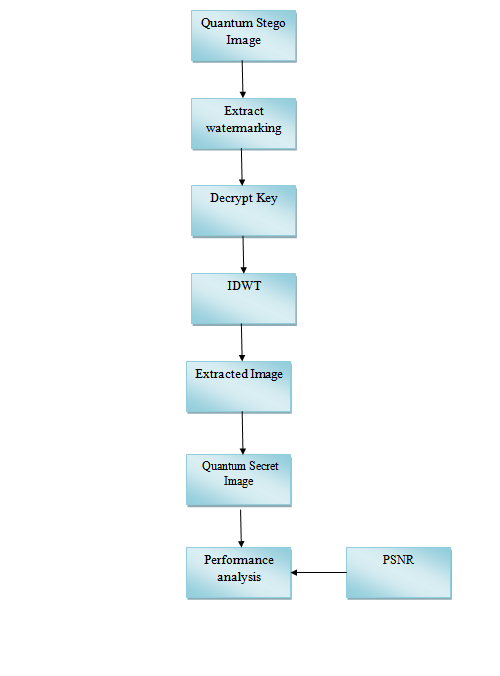 ALGORITHM DESCRIPTION:
QIMAGE:
• Quantum image processing (QIP) is primarily devoted to using quantum computing and quantum information processing to create and work with quantum images.
• Due to some of the astounding properties inherent to quantum computation, notably entanglement and parallelism.
• It is anticipated that QIP technologies will offer capabilities and performances that are, as yet, unrivaled by their traditional equivalents.
• These improvements could be in terms of computing speed, guaranteed security, and minimal storage requirements, etc.
DWT ALGORITHM:
• A discrete wavelet transform (DWT) is any wavelet transform for which the wavelets are discretely sampled.
• As with other wavelet transforms, a key advantage it has over Fourier transforms is temporal resolution
• It captures both frequency and location information (location in time).
• Wavelets are often used to denoise two dimensional signals, such as images
• Wavelets, by contrast, have both frequency and location. As before, the first completes zero cycles, and the second completes one cycle. However, the third and forth both have the same frequency, twice that of the first. Rather than differing in frequency, they differ in location — the third is nonzero over the first two elements, and the forth is nonzero over the second two elements.
LSB:
• In digital steganography, sensitive messages may be concealed by manipulating and storing information in the least significant bits of an image or a sound file.
• In the context of an image, if a user were to manipulate the last two bits of a color in a pixel, the value of the color would change at most +/- 3 value places, which is likely to be indistinguishable by the human eye.
• The user may later recover this information by extracting the least significant bits of the manipulated pixels to recover the original message.
MSB:
• In computing, the most significant bit (MSB, also called the high-order bit) is the bit position in a binary number having the greatest value.
• The MSB is sometimes referred to as the high-order bit or left-most bit due to the convention in positional notation of writing more significant digits further to the left.
• The MSB can also correspond to the sign bit of a signed binary number in one s or two s complement notation, "1" meaning negative and "0" meaning positive.
QUANTUM WATERMARKING:
• A digital watermark is a kind of marker covertly embedded in a noise-tolerant signal such as an audio, video or image data.
• It is typically used to identify ownership of the copyright of such signal. "Watermarking" is the process of hiding digital information in a carrier signal
• The hidden information should,but does not need to, contain a relation to the carrier signal. Digital watermarks may be used to verify the authenticity or integrity of the carrier signal or to show the identity of its owners.
• It is prominently used for tracing copyright infringements and for authentication.
SYSTEM REQUIREMENTS:
HARDWARE REQUIREMENTS:
 Processor Type : Pentium -IV
 Speed : 2.4 GHZ
 Ram : 128 MB RAM
 Hard disk                                : 20 GB HD
SOFTWARE REQUIREMENTS
 Operating System           : Windows 7
 Software Programming Package           : Matlab R2014a
REFERENCES:
[1] Vipula Madhukar Wajgade, Suresh Kumar,“Enhancing Data Security Using Video Steganography”, International Journal of Emerging Technology and Advanced Engineering, Vol. 3, No. 4, pp. 549-552, April 2013.