ABSTRACT:
High vehicular mobility causes frequent changes in the density of vehicles, discontinuity in inter-vehicle communication, and constraints for routing protocols in vehicular ad hoc networks (VANETs). The routing must avoid forwarding packets through segments with low network density and high scale of network disconnections that may result in packet loss, delays, and increased communication overhead in route recovery. Therefore, both traffic and segment status must be considered. This paper presents RTISAR, an intersection-based segment aware algorithm for geographic routing in VANETs. This routing algorithm provides an optimal route for forwarding the data packets toward their destination by considering the traffic segment status when choosing the next intersection. RTISAR presents a new formula for assessing segment status based on connectivity, density, load segment, and cumulative distance toward the destination. A verity period mechanism is proposed to denote the projected period when a network failure is likely to occur in a particular segment. This mechanism can be calculated for each collector packet to minimize the frequency of RTISAR execution and to control the generation of collector packets. As a result, this mechanism minimizes the communication overhead generated during the segment status computation process. Simulations are performed to evaluate RTISAR, and the results are compared with those of intersection-based connectivity aware routing (iCAR) and traffic flow-oriented routing (TFOR). The evaluation results provided evidence that RTISAR outperforms in terms of packet delivery ratio, packet delivery delay, and communication overhead.
EXISTING METHOD:
The most recent intersection-based routing protocols are discussed in the following and TABLEI summarizes the comparison between them. A geographical greedy traffic-aware routing (GyTAR) protocol proposed that dynamically chooses intermediate intersections through which packets can travel to reach their destination. The number of vehicles and the curve metric distance toward the destination are considered during the selection process. The segment with the largest number of vehicles and shortest route to the destination is given the highest score. Fixed location cells are formed within each segment, and each cell shares the same radius as the transmission range.
DISADVANTAGES:
• Wi-Fi model
• Mobility model
• Propagation channel model
• Network model
• Traffic model
• Protocols performance
PROPOSED METHOD:
A. Generate, Forward and Declared Collector Packet Phase:
The GFD-CP phase is initialized by the vehicle that moves on a segment by generating a CP upon reaching the intersection area. The CP collects information about the traffic segment status, which is then forwarded from the current to the next intersection.
B. Bounded Generation of Collector Packet Reply Phase:
At the end of GFD-CP, RTISAR generates a CPR that is directed to the starting intersection as shown in Figure 5 in order for the computed results of RTISAR to become readily available at the intersections and to suppress the redundant generation of CPs.
C. Decision Data Packet Routing Phase:
As mentioned in phases GFD-CP and BG-CPR, when the vehicle receives a CP or CPR at an intersection, the carried RTISAR results are processed to evaluate the segment event (Sevent) metric. Seventis based on three parameters, namely, segment density (Sden), segment connectivity (Scon), and segment load (Sload)
ADVANTAGES:
1. Wi-Fi model: To implement such applications in a vehicular environment, several protocols should be induced to take full advantage of the communication between V2V. 802.11 is a set of institute for electrical and electronic engineers (IEEE) standards for WLAN.
2. Mobility model: The heightened pace at which wireless networks are being transformed throughout the world is the outcome of many different factors.
3. Propagation channel model: The most accurate means of predicting the path loss in simulations is using a 3D ray-tracing technique combined with accurate models of the geometry and RF properties of the environment.
4. Network model: A graph G (V, E) is used to model VANETs, where mobile devices are denoted by V and the arcs’ set is denoted by E. The communication range intersection between two devices is modeled by the arcs.
ALGORITHM DETAILS:
Real-Time Intersection-based Segment Aware Routing Algorithm:
SYSTEM ARCHITECTURE: 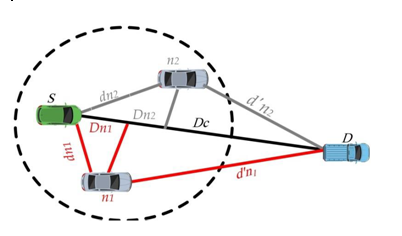