ABSTRACT
Fraudulent behaviors in Google Play, the most popular Android app market, fuel search rank abuse and malware proliferation. To identify malware, previous work has focused on app executable and permission analysis. In this propose, we introduce FairPlay, a novel system that discovers and leverages traces left behind by fraudsters, to detect both malware and apps subjected to search rank fraud. FairPlay correlates review activities and uniquely combines detected review relations with linguistic and behavioral signals gleaned from Google Play app data (87 K apps, 2.9 M reviews, and 2.4M reviewers, collected over half a year), in order to identify suspicious apps. FairPlay achieves over 95 percent accuracy in classifying gold standard datasets of malware, fraudulent and legitimate apps. We show that 75 percent of the identified malware apps engage in search rank fraud. FairPlay discovers hundreds of fraudulent apps that currently evade Google Bouncer’s detection technology. FairPlay also helped the discovery of more than 1,000 reviews, reported for 193 apps, that reveal a new type of “coercive” review campaign: users are harassed into writing positive reviews, and install and review other apps.
EXISTING SYSTEM:
• As there are many apps available in market users are in fuzzy state while downloading the apps for their use.
• Different App stores like Google play store and Apple store launched their leader board on daily basis to inspire the users to download most popular applications by observing the ranking of applications.
• In fact to advertise a particular mobile Apps, leader board of apps is the most important way in the market. An app which is at the top on the leader board leads to large number of downloads and it will gain maximum profit.
• In order to have their Apps ranked as high as possible, app developers promote their apps using various ways such as advertising, offers etc.
• Such applications damage to phone and also may cause data thefts. Hence such applications must be identified, so that they will be identifiable for play store users.
DISADVANTAGES:
 Due to the huge number of mobile Apps, it is difficult to manually label ranking fraud for each app, so it is important to automatically detect fraud without using any basic information.
 Mobile Apps are not always ranked high in the leader board, but only in some leading events ranking that is fraud usually happens in leading sessions.
PROPOSED SYSTEM:
• We are proposing an android application which will process the information, comments and three reviews of the application with natural language processing to give results. So it will be easier.
• Specifically, they first showed that ranking fraud happened in leading sessions and provided a method for mining leading sessions for each App from its historical ranking records.
• Then, they identified ranking based evidences, rating based evidences and review based evidences for detecting ranking fraud to decide fraud application. FairPlay, a system to detect both fraudulent and malware Google Play apps.
• They studied on a newly contributed longitudinal app dataset, in which they had shown a high percentage of malware is involved in search rank fraud; both are accurately identified by FairPlay.
ADVANTAGES:
 We are proposing a web application which will process the information, comments and thee reviews of the application with natural language processing to give results in the form of graph.
 So it will be easier to decide which application is fraud or not. Multiple applications can be processed at a time with the web application.
 In this way it will find out score of each of the reviews and determine whether app is fraud or not on the basis of review based evidences
SYSTEM ARCHITECTURE: 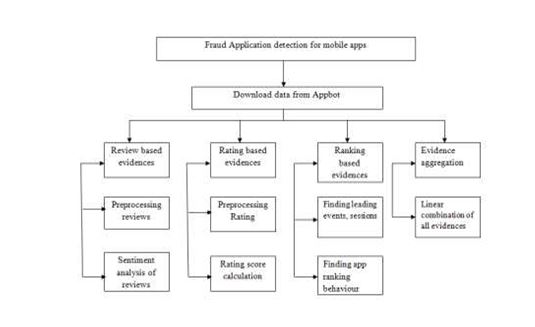